Did COVID-19 Move People to Retire?

As we have seen with past periods of financial disruption and dislocation, the COVID-19 coronavirus outbreak has changed the retirement plans of more than 3.1 million Americans, age 55 and older. According to the Census Bureau, more than 3 million people plan to apply for Social Security benefits earlier than they had originally planned because of job loss or health issues related to the pandemic.

This is being partially offset by the 1.4 million people in the same age cohort who anticipate having to work longer because of the negative financial impact of the viral outbreak. The net result is that approximately 1.7 million Americans will retire sooner than expected, thus opening jobs for younger workers.

However, we have seen a significant uptick in asset values since the March 2020 lows, in both the financial markets and in real estate. Some of the additional wealth that has been created or built over the last 16 months could be used to offset the loss in Social Security income.

A chart below from Bloomberg, sourced by the Bureau of Labor Statistics, shows the number of workers age 55+. It was relatively steady until calendar year 2000. Then, when the oldest baby boomers turned age 55, it turned upwards and continued to rise steadily until 2020’s viral outbreak. 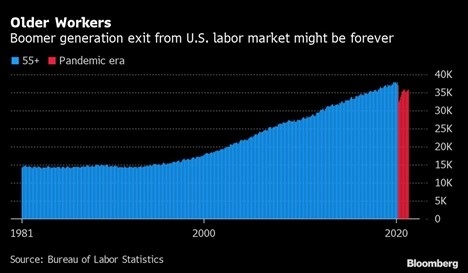 Some older Americans are having a hard time finding new employment. Turning to Social Security, even on a reduced basis, and early retirement seems like the least bad option to them. Unfortunately, some of them may have to return to the workforce down the road if their cash flow and assets are insufficient to provide for their standard of living.

We will have to watch closely to see the long-term impact on those transitioning to retirement today. If you have friends or loved ones who are trying to make these important, often irrevocable decisions and are looking for guidance, please let us know. We would love to be a resource to help people make smart decisions in times of volatility and distress. It is part of our mission as we continue “ Moving Life Forward” together.