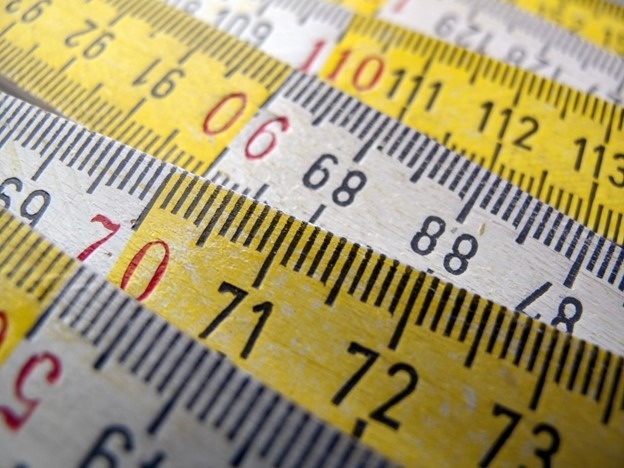 For those of you old enough to remember, 1975 was a challenging and interesting time to be alive. We had recently closed the door on the Vietnam War and Watergate. We were anxiously looking forward to our nation’s Bicentennial celebration the next year. The stock market was starting to rebound from its biggest two-year drop since the Great Depression. We had recently come through the Arab Oil Embargo, and the long gas lines that accompanied it. Inflation was starting to rage, and the Misery Index, which combines unemployment and inflation, was rising sharply.

To add to this stress, Congress passed the Metric Conversion Act of 1975. This was around the same time many other countries were switching over to the metric system. In 1975, I was 10 years old and in fourth grade. I loved all things related to math, and was very comfortable with the Imperial System of Measurement, where things are measured in feet, inches, pounds, ounces, etc.

Suddenly, my teacher was talking about things such as kilometers, millimeters, liters, and grams. Unfortunately, instead of learning the absolutes of the new system, we were generally taught to compare things. We were taught to compare kilometers to miles, yards to meters, and liters to quarts. This never quite caught on in the United States, and we are still one only of three countries in the world (along with Myanmar and Liberia, how is that for company) that have not fully adopted the metric system.

In a similar fashion to trying to change to the metric system, and unbeknownst to most people, the US Bureau of Labor Statistics have made several adjustments over the last forty years to how they calculate inflation via the Consumer Price Index, CPI. These have had a major impact on the inflation rate that is reported each month, especially when compared to what Americans feel and experience at the grocery store and gas pump.

As you can see from this recent chart from our friends at Blackrock, inflation would be significantly higher today if we used the same methodology that was used in 1990 or 1980. Very few people are aware that these changes have been made, or how it impacts what is reported by the BLS each month. It would be like changing the grading scale on your child’s report card, without telling your son or daughter what need to get an A. 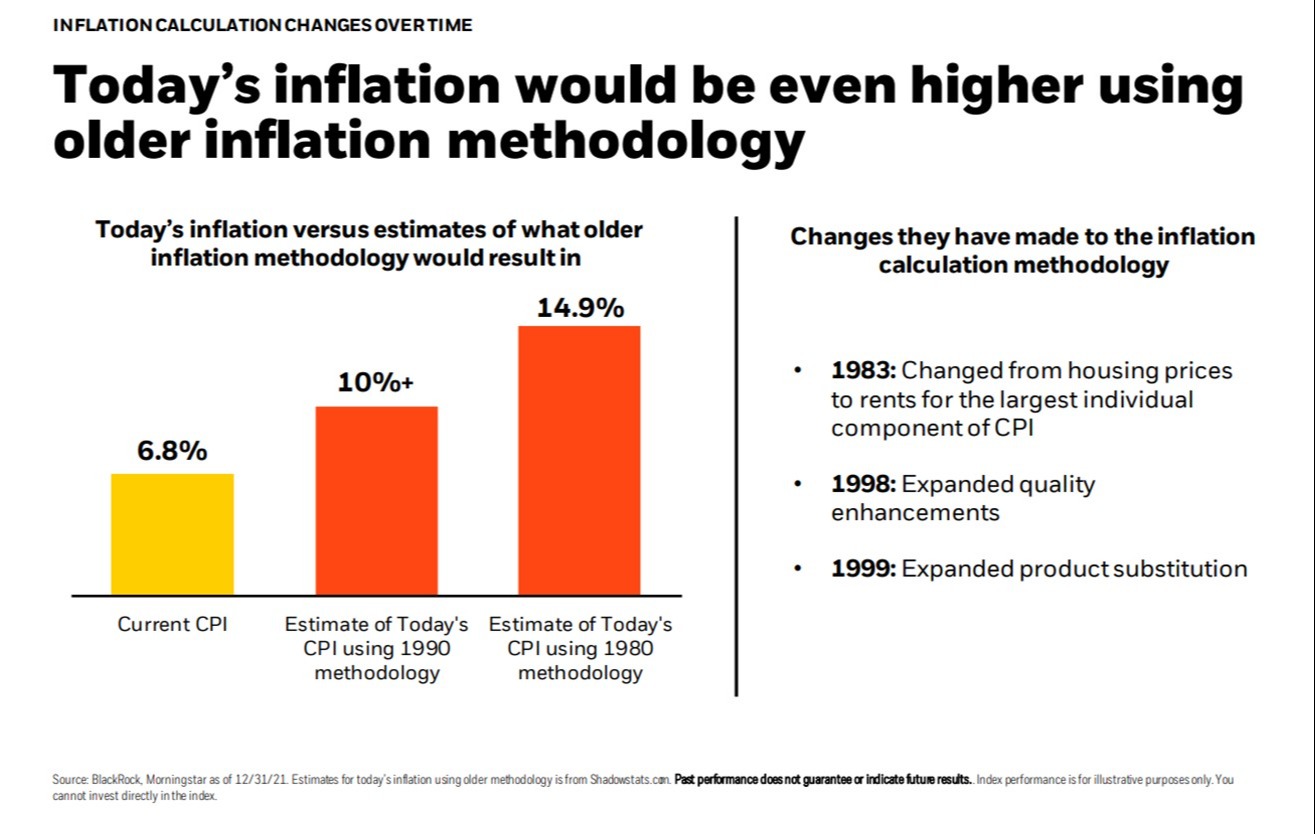 I will draw your attention to two of the major changes that were made and how they impact the numbers reported. First, in 1983 they changed how they measure the housing component of CPI, which makes up nearly 23% of the index, from the actual change in housing prices to something called Owners Equivalent Rent, OER.

What is OER, and how is it calculated? You may find this incredibly hard to believe in today’s world of technology and high frequency data, as well as the National Do Not Call Registry, but this number is derived by people at the BLS calling several thousand homeowners each month and asking them what they would charge to rent their home to someone.

Think about that for a moment…

One of the most important pieces of data that is released every month is based on random phone calls to individuals, who do not have a strong idea or financial anchor for how much their home would really rent for. This astounds me every time I see this number discussed.

In 1999, the formula was changed again to allow for expanded product substitution. The theory goes something like this. If you were going to buy steak at the grocery store and the price was too high, you would likely buy ground beef instead. By substituting the purchase of ground beef for the purchase of steak, you spend less money, and inflation remains lower than the actual price increase that you see at the cash register (do they still call them cash registers?).

As you can see in the chart, inflation was reported at 6.8% in December, that number rose to 7.0% in January ‘22. However, using the methodology that was used in 1980, the last time we were undergoing double digit inflation, we would be experiencing inflation of 14.9%. That number coincides more realistically to what many people are experiencing when managing cashflow and expenses in today’s world.

In anecdotal conversations with two business owners in the last week, they have both shared their extreme frustration in supply chain delays, material, and labor costs, which have risen dramatically in the last year. One told me the cost of copper wiring that he had to purchase for his business had risen 300% last year. He also had to give his employees raises of $5 per hour or risk losing them to competitors. A restaurant owner that I was talking with on Saturday said that he is going to have to raise menu prices for the third time in the last year. He fears that people will stop coming to his restaurant. He is also dealing with significant employee turnover due to wage pressures.

Looking at these government statistics makes me feel like I am back in my classroom in 1975. I understand things in terms of inches, pounds, and gallons, while my teachers are telling me that things are really measured in centimeters, kilograms, and liters. If it feels like the changes to the inflation calculations are akin to your fourth-grade teacher trying to teach you the metric system, you are not alone. There are changes taking place that no one is telling you about, and these are impacting your life every day.

The advisors of Impel Wealth Management want to make certain that you are aware of these important economic and financial issues. We will continue to work with you through what this means to your pocketbook and cashflow as we continue “Moving Life Forward”. As always, if you have questions please do not hesitate to reach out. If you feel this information would be valuable to others, please share it with your friends and loved ones.