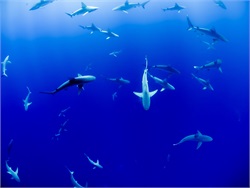 Jesse W. Hurst, II, CFP®, AIF®
June 22, 2020
Share |
Someone recently said to me that if you ever wondered what it was like to live through the Spanish flu pandemic of 1918, the job loss of the Great Depression AND The Los Angeles Watts Riots of 1965, all at the same time, YOU ARE!!
We are not halfway through calendar year 2020, and the citizens of the United States have been through more physical and emotional pain and trauma than we would have ever thought possible just a few months ago. In late January and early February of this year, most people thought that the impeachment process and the very strong economic growth we were experiencing were going to be the two biggest issues in the upcoming Presidential and Congressional elections. Based on everything that has happened over the last four months, people no longer even mention impeachment, and the strong growth and full employment which were here just a few months ago, now seem like a distant memory.
This has elicited a massive emotional response as we are dealing with multiple crises concurrently. While everybody knows that the coronavirus kills, this is the seventh viral outbreak we have dealt with since calendar year 2000. There have been intrusive personal lockdowns, quarantines and social distancing requirements, along with an unprecedented shuttering of the economy.  Why has the reaction to this outbreak been so different than previous episodes? One answer could be that this is the first social media pandemic we have ever experienced. Social media and cable news carry narratives in real time to people across the globe. Some of what is spread through these outlets is not true or fact checked. However, it does seem to spread fear very quickly.
According to First Trust Advisors Chief Economist Brian Westbury, this leads to people confusing what is scary with what is dangerous. He posits that these are NOT the same thing. While the COVID-19, coronavirus has tragically killed more than 100,000 people in the United States, and more lives are lost every day, Brian states that based on data that has come to light, the illness is still only slightly to mildly dangerous for most people under age 65, along with those who have pre-existing comorbidity issues. According to CDC data 81% of the deaths from COVID-19 are in this age group.
While every life is important and no death should ever be ignored or downplayed, the fear associated with the current situation has allowed us to move resources away from issues that are more dangerous but less scary. According to the website Komodo, since early March when the first shelter in place orders were issued, cervical cancer screenings were down 68%, cholesterol panels were down 67% and blood sugar test for diabetes were off 65%. I personally know that more than half a dozen of our clients have had surgeries postponed during this time period.
The first PG rated movie I saw at age 10 was Jaws. Ever since that movie came out, people in the United States have been fearful of shark attacks. According to the Florida Museum, there have been six fatal shark attacks in the last 10 years in the United States. However, this does not stop people from being fearful of sharks or thinking about them every time they get in the ocean.
Nobody that I know has considered changing their behavior to stop driving. However, it is statistically much more dangerous than getting bitten by a shark. More than 38,000 people die every year in the United States in crashes on roadways. An additional 4.4 million people are injured seriously enough to require medical attention, according to the Association for Safe International Road Travel.
Cigarette smoking is down in the United States over the last several decades. But, according to statistics from the CDC, it is still extremely dangerous. More than 480,000 people die each year in the United States from smoking related deaths. This includes more than 41,000 deaths as a result of secondhand smoke. On average, smokers die 10 years earlier than non-smokers.
I will conclude with a story that somebody told me many years ago to illustrate the difference between "scary" and "dangerous". A man is at the beach playing in the shallow waves when somebody yells "SHARK!!". He jumps out of the water, gets into his car, drives to a fast food restaurant for lunch then lights up a cigarette on his way home. He has avoided one scary activity but pursued many that were more dangerous.
Emotions tend to lead to poor decisions and poor outcomes. The team at Impel Wealth Management is here to help you try to understand and guide you through these situations successfully. It is part of our mission and calling as we continue "Moving Life Forward" together. Please do not hesitate to call if you have questions or concerns about how emotional biases could impact your financial goals and resources. Have a great day.
© 2020 Jesse Hurst