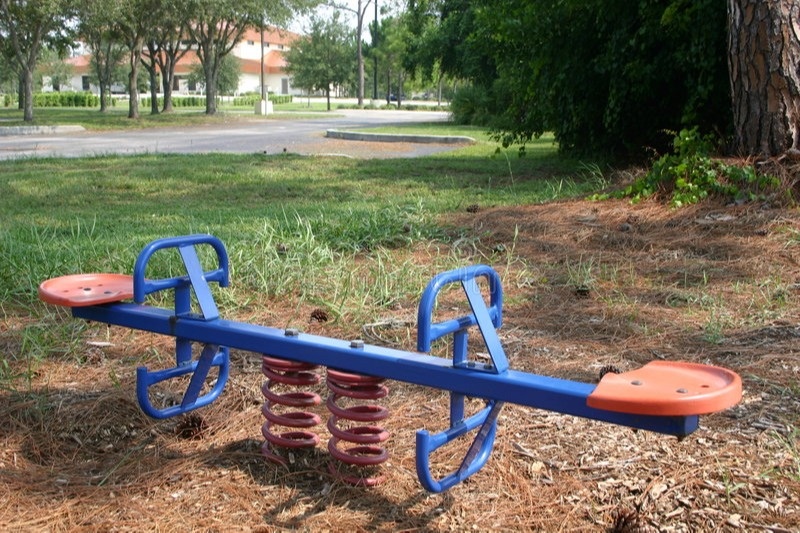 How BIG Was the Bomb??

As we began the new year, the Federal Reserve Bank had not yet started raising interest rates from their historically low levels. As a matter of fact, they were still buying $120 billion of government and mortgage bonds each month to further suppress long-term interest rates. They had been telling us for the better part of the last year that inflation was “temporary or transitory”. They told us that once supply chain issues were fixed, inflation would be back down in the 4% range in short order.

Of course, none of this turned out to be true. Then, on January 5th, the minutes from the December Fed meeting were released. They immediately began to shake the global stock and bond markets. The Fed decided to retire the word transitory and to begin increasing interest rates to combat rising and persistent inflation.

At that time, I wrote an article entitled Will the Bond Market Give Us a Cherry Bomb? I posited that the Fed’s actions could cause a cherry bomb to occur in the bond markets, much like the ones kids used to give each other on the teeter-totters of elementary school playgrounds. A link to that article is included here: https://www.impelwealth.com/blog/will-the-bond-market-give-us-a-cherry-bomb 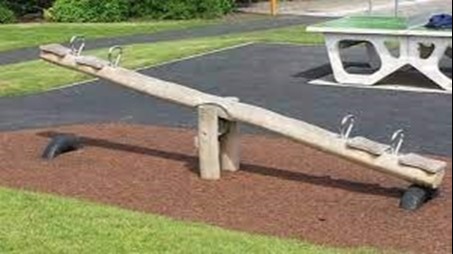 Just like a teeter-totter, bond market values move in the opposite direction of interest rates. The fear was that if the Fed started to raise interest rates aggressively, bond prices would suffer. I was trying to give people an early warning of the risks arising in what is typically the more conservative part of their portfolio. From a historical basis, people use bonds to help offset the market volatility and economic risks of the stock portion of their portfolios.

My concerns turned out to be a massive understatement, as the Fed embarked on its fastest interest rate increase campaign in nearly 40 years. This has caused the bond market to have its worst year since 1976…by multiples of previous losses. Since that time, the worst year of return in the bond market was approximately a 3% loss in the calendar year 1994, when the Fed unexpectedly raised interest rates seven times. You can see that the loss through the first 10 months of this year is five times worse!! 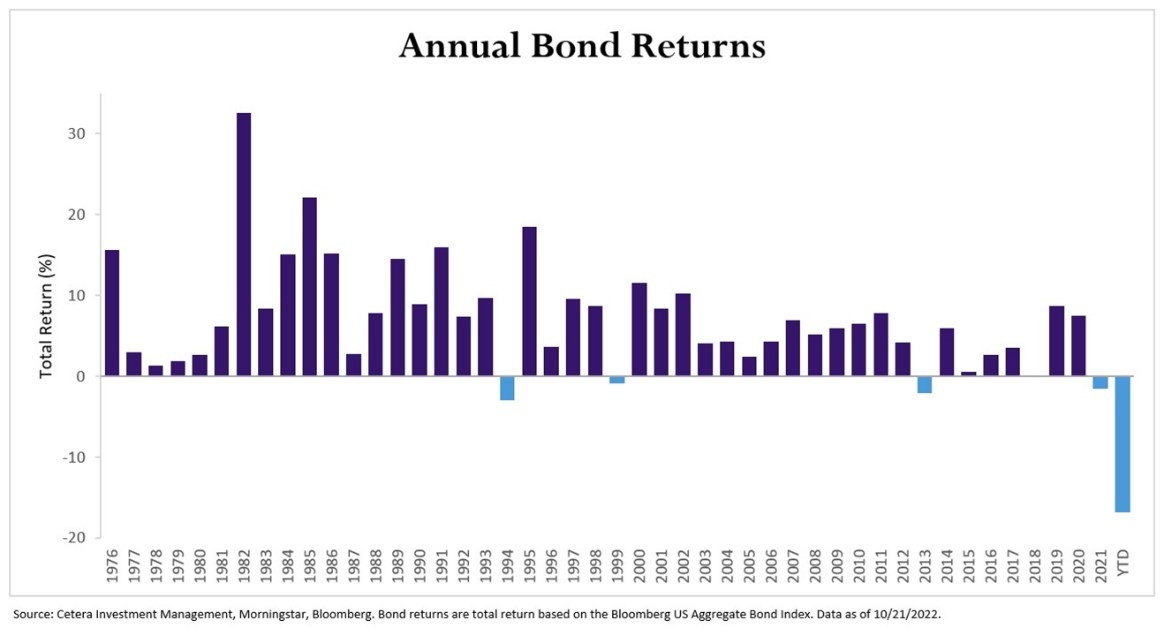 From a longer-term, historical basis, we are on track for one of the four worst years of bond market performance over the last 300 years. Similar losses were associated with the post-Civil War era in 1865, and 1920, after the conclusion of World War I. 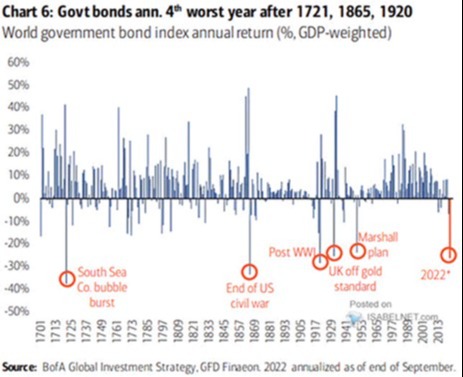 For most of the last 30 years, periods of economic downturn and falling stock markets were accompanied by the Federal Reserve Bank lowering interest rates to spur economic growth. Consider the dot.com bubble and 9/11, the ’07–‘08 Financial Crisis, and the Covid lockdowns of 2020. Of course, cutting interest rates also caused bond prices to rise, based on the teeter-totter principle above.

So, what is one to do now? Many people are so discouraged by the negative returns in the bond market, that they question whether they should exit this asset class. As is the case when you are driving, the view in the rearview mirror behind you is significantly different from the view through the windshield ahead.

Future returns of bonds will largely be driven by two factors. The first is the interest rate earned on the bonds. As the Fed has now raised interest rates by 3.75% over the last 7 1/2 months, the rate of return available on bonds is more attractive than it has been in 15 years or longer.

Secondly, inflation will eventually start to fall from the highest levels we have seen in the last 40 years, and it may become more evident that the Fed will need to reverse course. They may have to lower interest rates to spark economic growth and help lift us out of a recession that they created. When that happens, bond markets will eventually rise in value. The combination of price appreciation, along with higher interest rates, should make future bond returns more attractive and competitive than what we have experienced recently.

This is an important and complex topic. As many of our clients have anywhere from 30%-50% of their assets in bonds, we wanted to keep you in the loop with our latest research and thought process. We also want to help you avoid mistakes based on the emotional response of looking in the rearview mirror alone. As you can see from the chart below, it has been a brutal year for both stocks and bonds, and it is natural to feel both pain and fear when you look at your account values. 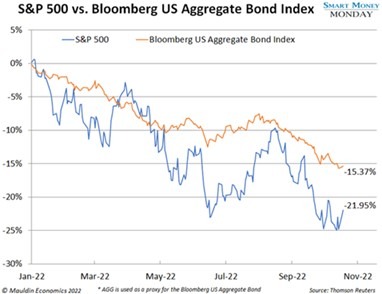 It has been nearly 40 years since we have seen the Fed aggressively raising rates in the face of a slowing economy and a falling stock market. All of this may have you feeling like you got dropped from the high end of the teeter-totter this year. The cherry bomb we feared from the bond market in February, actually turned out to be far worse than what we expected.

Understanding the past while looking to the future is part of our job. Our goal is to use that information and analysis to help manage your hard-earned resources to allow you to accomplish your family and life goals. As always, if you have questions about your individual situation, please feel free to reach out to your advisor at Impel Wealth Management. We will do our best to keep “Moving Life Forward”.

The return and principal value of bonds fluctuate with changes in market conditions. If bonds are not held to maturity, they may be worth more or less than their original value.