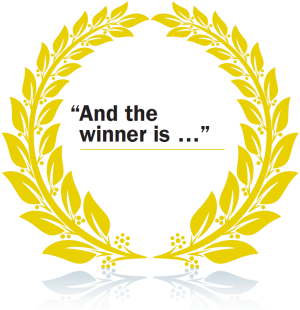 Point/Counterpoint Inflation - And the Winner Is...??

Jesse W. Hurst, CFP®, AIF®
June 30, 2021
Share |
Over the last two weeks, we have been looking at both sides of the new and alarming inflation narrative in true Point/Counterpoint style (just like they did in the 1970’s on the TV show 60 Minutes). 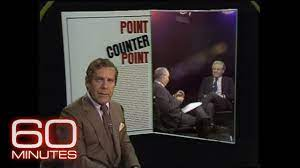 The first week, we spent a significant amount of time looking at why inflation pressures are building up at a faster rate than we have seen in more than three decades. These included:
- A momentous reopening of the economy, especially the service side of the economy, which was shut down due to the coronavirus outbreak.
- Massive fiscal and monetary stimulus that has given consumers resources to spend money, along with pent-up demand from being locked down for over a year.
- Supply chain disruptions and backups that are leading to delays in delivery times along with rising prices for most commodities.
- Businesses having to raise wages to lure workers, currently on enhanced unemployment benefits, back to the workforce. Higher wages generally lead to either smaller profit margins for businesses, or higher costs for consumers.
These fears were at least partially recognized by the Federal Reserve Bank this week. When they updated their quarterly projections for inflation, we found that prices are projected to rise 3.4% on a year-over-year basis. This is a full percentage point or more than 40% higher than what they projected just three months ago. (See chart below PCE inflation). 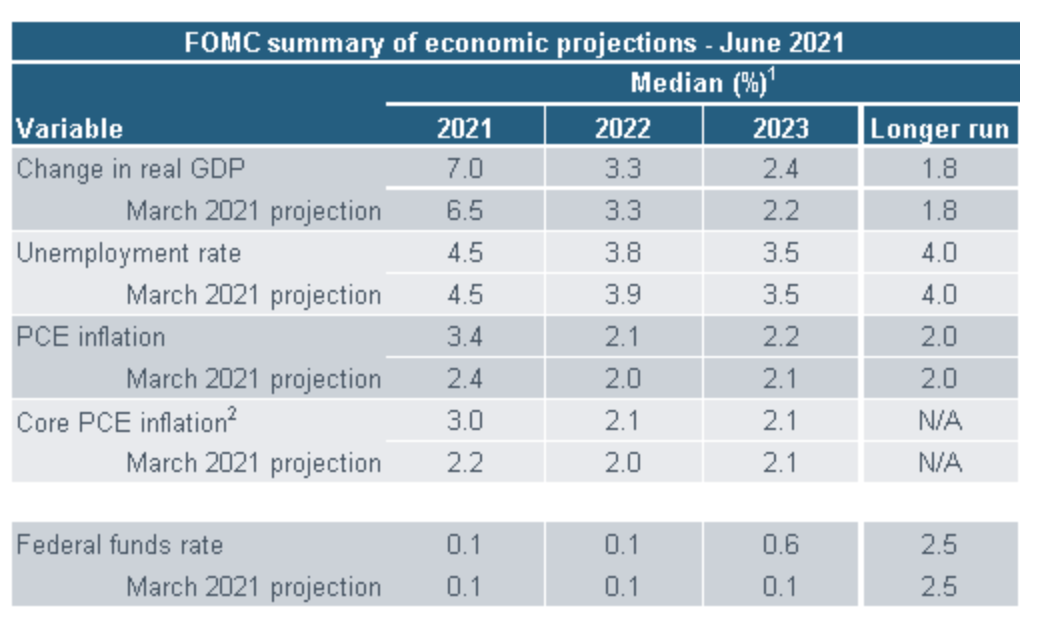 The Fed is now projecting that they may raise interest rates two times by the end of the calendar year 2023, more than two years away. They also did nothing to cut back on the $120 billion per month of Treasury and mortgage bonds that they are buying to support the bond market and the banking system.
Last week, we took the alternate side (or as Gary Larson would say, the Far Side), and pointed out a number of factors that could keep inflation from running rampant as it did in the late 70s and early 80s. These included:
- Massive increases in the amount of debt that the US and most major global economies have taken on in the last 15 months.
- Historical data that shows that typical debt bubbles lead to periods of deflation or disinflation.
- Global demographics that show both a slowing rate of birth and aging populations. Both tend to be leading to lower inflation rates.
- Continued gains in technology, which have historically led to lower costs and more efficiency in the economy.
As pictured below, The Fed Chairmen of the past (from Paul Volker to Janet Yellen) continue to portend a deflationary trend. 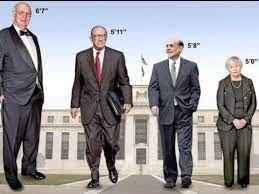 So, which side is right?? Drumroll please….
It may turn out that both sides are right. We think that the pro inflation argument makes a lot of sense for at least the next couple of years, and possibly over a longer secular timeline of 3 to 5 years.
However, we believe that the historical debt levels represent a misallocation of capital in the economy. This will lead to lower productivity and growth going forward. There is also the matter of who is going to ultimately pay back all this debt and how are they going to do it? These factors, along with aging demographics and the technological gains that we discussed above will likely lead to lower inflation longer-term.
All we must do is look across the ponds, east or west. Both Europe and Japan have had far higher levels of debt for longer periods of time than we have. In both scenarios, it has led to depressed levels of growth and negative interest rates, which have been devastating to their economies and their banking systems.
While nobody knows for sure what the outcome of this will be, there are likely going to be challenges that we will have to watch for and proactively address for the benefit of you, our trusted friends and clients. The battle and the tactics that we use to address these issues will be critical to helping you keep “Moving Life Forward”. We will be there by your side, as we live through future interesting times.
The views state in this commentary are not necessarily the opinion of Cetera Advisors LLC and should not be construed directly or indirectly as an offer to but or sell any securities mentioned herein. Due to volatility within the markets mentioned, opinions are subject to change without notice. Information is based on sources believed to be reliable; however, their accuracy or completeness cannot be guaranteed. Past performance does not guarantee future results.