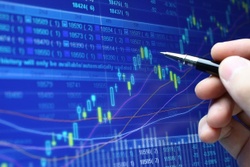 In 1955 Sammy Davis Jr. had a hit song, Something's Gotta Give, written by Johnny Mercer the year before. The opening lyrics are as follows:

We can see a similar principle play out in our US economy over the last couple of years. We originally went into our COVID-19 economic shutdowns in March 2020 to try to stop the initial spread of the viral pandemic.

The US economy has evolved over time. Just before the pandemic hit, the service sector of the economy made up more than 80% of our economic activity. It logically follows that manufacturing had shrunk to less than 20% of our overall output.

We know that the coronavirus pandemic has hit the service side of the US economy in a disproportionate manner. Think about the travel industry…hotels, airlines, and cruise ships. We also significantly curtailed activity in restaurants, salons, gyms, and health clubs. The result was that consumers could not spend money in the service side of the economy as they had grown accustomed to doing.

At the same time, the CARES Act, which included direct stimulus checks and enhanced unemployment benefits, followed by the $900 billion stimulus plan from the Trump administration in December 2020, followed by the American Rescue Act from President Biden in March 2021, threw massive amounts of liquidity to US consumers.

Faced with no longer being able to travel, eat out, go to sporting events or concerts, individuals in the United States did two things. They increased their savings rates to the highest level ever recorded. And, as you can see in the chart below, they spent money on manufactured goods in record amounts. This created more demand than was expected. In turn, we ended up with massive supply shortages, bottlenecks, shipping backlogs and the inevitable inflation. 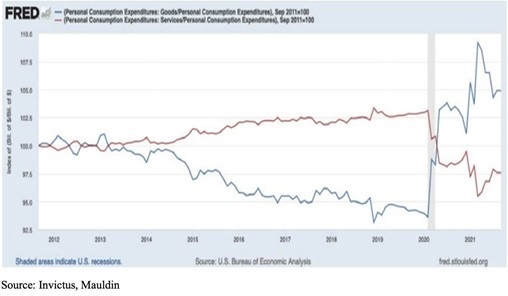 Sounding a lot like the song lyrics above, US economist Darrell Spence stated, “When stimulus-induced demand met Covid restricted supply it created distortions in the economy. That fueled rapidly rising prices wherever there were bottlenecks.”

As Sammy Davis Jr. sang, Something's Gotta Give… and that something is inflation. We believe that eventually production will ramp up to meet increased demand, while that demand starts to revert towards historical norms as the impact of stimulus fades into the background.

How long will this take? We will continue to watch, monitor, and keep you in the loop. We thought this was a good illustration of what we are all dealing with at the present time. We will have to watch how this plays out as well as the impact on our client’s cashflow needs and investment portfolios. It is important to have understanding and context as we continue “Moving Life Forward”.