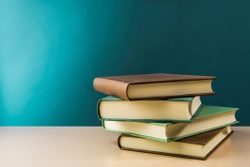 Airing for seven seasons starting in 1989, HBO’s Tales from the Crypt was an American horror anthology. It was based on a 1950s EC Comics series of the same name. Each of the series 93 episodes was a self-contained story of something macabre, sinister or supernatural. The show was hosted by the Cryptkeeper, a corpse with a ghoulish sense of humor.

Playing that role today, I have three different talesfrom the crypt(o) to share with you. The first two seem fit for the television series above. This should not surprise anyone, as many cryptocurrencies have lost roughly 2/3 of their value over the last year. The third yarn is a little more hopeful and looks towards the long-term future and adoption of these man-made currencies. However, you would have to be willing to hold on for a wild ride over the next few decades.

The first story relates to a survey done by researchers for the Social Psychology. The survey was given to 566 investors to determine what are the typical personality traits and attitudes associated with those who are either invested in or were interested in investing in crypto. The survey found that those people tend to be drawn to high-risk investments and are generally distrustful of the government.

These investors tended to have one or more of the following personality traits that may appear as the four dark horsemen: narcissism, psychopathy, Machiavellianism, and sadism. Common themes of these personality types include fear of missing out and a belief in conspiracy theories. Some also tend to have the cognitive biases of overconfidence, confirmation bias (only reading things that confirm your own beliefs), and a sense of delusion.

It would be an overgeneralization to say that everyone who speculates (notice that I did not say invest) in crypto falls into one of these categories. However, it does seem that many who like to buy or sell crypto enjoy asset classes that are akin to jumping out of an airplane without an auxiliary chute.

The second tale comes from a report from Bank of America. They recently released a chart that showed the active number of crypto users at their bank. Interestingly, it fell by nearly half from the fall ‘21, when many crypto‘s were trading at a much higher valuation. This took the number from over 1 million users to approximately 500,000, as you can see below. 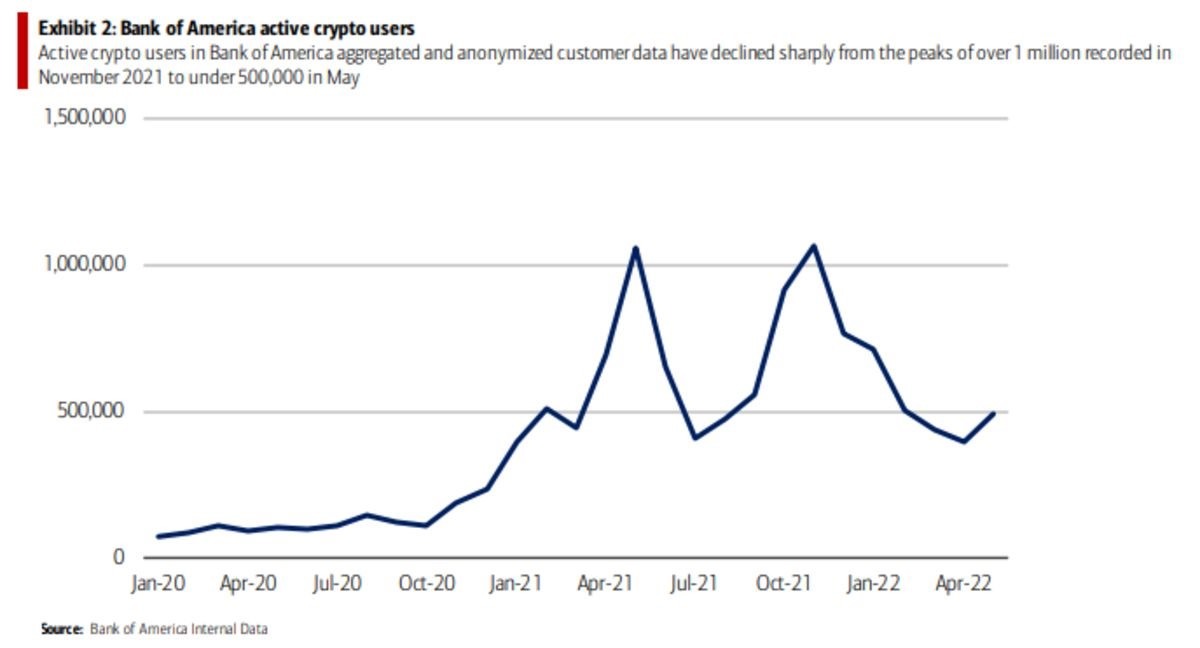 This also means that when the prices of these assets were much higher, people were more willing to buy. Conversely, as they fell in value, people sold and abandoned the very thing they were willing to buy at much higher prices. This type of behavior is not untypical for investors. However, it may be more pronounced in volatile asset classes such as this. You can see a similar drop in the chart during the initial Covid shutdowns in the spring of 2021.

Our third tale tells a somewhat more optimistic tale. Research recently released by blockchain infrastructure firm Blockchain Solutions in June showed that based on historical adoption of what were previously new and disruptive technologies, including such everyday conveniences as railroads, telephones, automobiles and radio, all followed a similar pattern.

Once 10% of the population adopts the new thing, growth becomes parabolic and penetration moves from those known as early adopters, to those in the early majority, and finally those in the late majority. For those of us born before 1970, we can certainly see how this took shape with personal computers, the Internet, and smart phones. 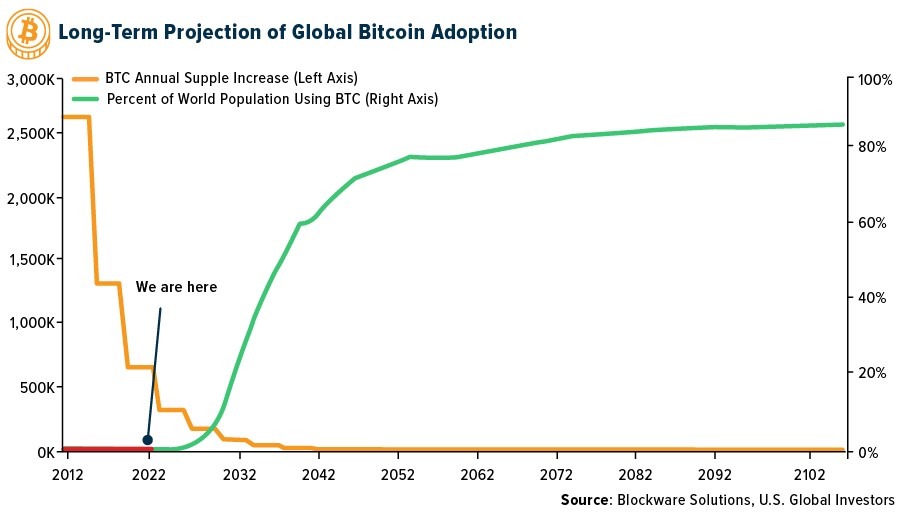 The CFP‘s of Impel Wealth Management often get questions, many times out of curiosity, about what crypto is and why it seems to move in such random and magnified ways. We are always looking for opportunities to further educate you, our trusted friends, and clients. As you can see from the three tails of the crypt(o) above, this is a very long-term outlook, and mass adoption could take several more decades.

We wanted to bring you additional information and context so that you can be better informed as your kids or grandkids talk to you about why they and their friends may be interested in crypto. Sharing some of this information or a couple of the charts above may very well make you the cool, hip parent or grandparent. We hope that’s the case as we continue “Moving Life Forward.”

Cetera Advisors LLC does not offer any direct investments, endorsement, or advice as it relates to Bitcoin or any crypto currency. This Is for Information purposes only.