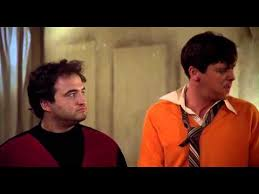 "Now we could do it with conventional weapons, but that could take years and cost millions of lives". - Otter 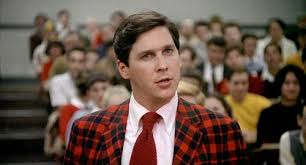 Last week, I posited that the Federal Reserve Bank had blown through all of the "conventional weapons" that they had painstakingly worked to build over the last five years. And, just like the fraternity brothers in Animal House saw seven years of college go down the drain when they were kicked out, the Fed saw many years of working to normalize interest rate policy go down the drain in just a few months with the onset of this COVID-19 medically induced economic coma.
If you look at the history of monetary policy, you will see that up until the Financial Crisis and Great Recession of 2007-2009, the Fed used the raising or lowering interest rates as its primary tool. This was like using the gas pedal or brake in your car.
Lowering interest rates was like pressing on the gas pedal and would allow the economy to accelerate by encouraging people to borrow money to buy cars, homes or consumer goods, and business owners to invest in plants, equipment and technology. Alternatively, raising interest rates was like pressing on the brake pedal in your car. It raised the cost of borrowing and allowed the Federal Reserve to slow the economy and curb inflation pressures.
However, the onset of the Great Recession, which was precipitated by a bubble in real estate prices and excessive leverage and speculation in the subprime mortgage space, ushered in a whole new arsenal of unconventional tools and weapons to fight recessions and financial disruption. We were introduced to TARP, TALF, Quantitative Easing and a number of lending facilities meant to backstop the liquidity and normal functioning of the bond and money markets. These new weapons were ushered in through a time of unprecedented coordination from the Fed, headed by Ben Bernanke and the Treasury Department, under the direction of Hank Paulson. While there is considerable debate about the long-term merits of these programs, they did help normalize that period of financial crisis. However, they have proven to be far easier to initiate than exit.
"I think we have to go all out. I think that this situation absolutely requires a really futile and stupid gesture be done on somebody's part!" - Otter
"And we're just the guys to do it!!" - Bluto

Fast forward to calendar year 2020 and the COVID-19 coronavirus pandemic. Once again there have been interest rate cuts, credit and lending programs from the Federal Reserve Bank that could inject more than $6 trillion (with a T) into the economy. In addition, the $2 trillion rescue package passed by Congress and signed by President Trump includes vast authority for the Treasury Department to help businesses, both large and small through various lending and grant programs. A link to a recent CNBC article outlining everything that has been done to save the economy from the government mandated shut down is outlined below.
Here is everything the Fed has done to save the economy- CNBC
https://www.cnbc.com/2020/04/13/coronavirus-update-here-is-everything-the-fed-has-done-to-save-the-economy.html
Once again, the Fed and the Treasury have gone all in. This time, it is Federal Reserve Chairman Jay Powell and Treasury Secretary Steven Mnuchin at the helm. 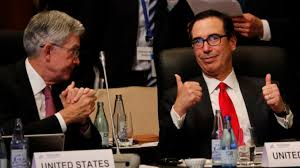 And they're just the guys to do it ... this time.
It is important to understand that this will likely increase our outstanding debt, which at the beginning of the year was approximately $22 trillion, to well over $25 trillion in the next 12 to 24 months. At some point, we are going to have to take a very hard look at who is ultimately going to pay this bill. In his book "On the Brink", former Treasury Secretary Hank Paulson states that in hindsight it was easy to question some of the decisions that were made and policies that were implemented. However, they were doing their best with the information they had at the moment. I am sure Chairman Powell and Secretary Mnuchin are doing the same. History will tell us whether they made all the right moves. We will continue to monitor these unprecedented events as we continue to "Move Life Forward" for you, our trusted friends and clients.