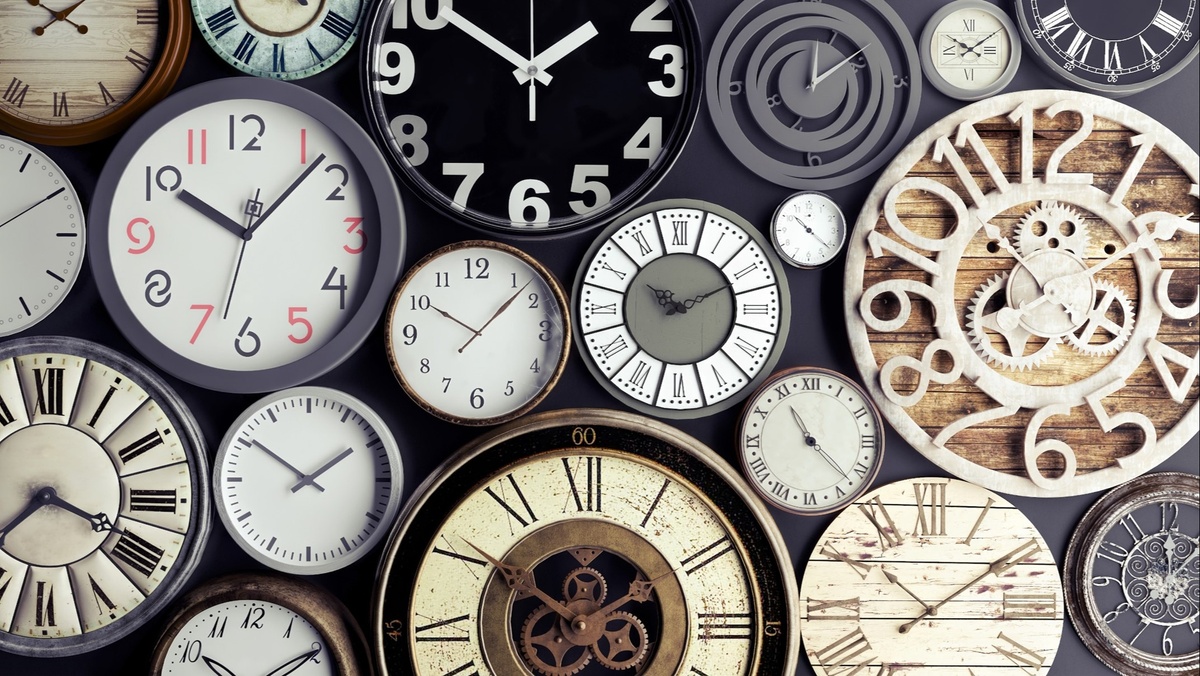 The Waiting is the Hardest Part

Featured on the 1981 album Hard Promises, the above is one of my favorite songs from Tom Petty and the Heartbreakers. Rachel and I were lucky enough to see them in concert at Quicken Loans Arena on June 10, 2017 (Joe Walsh opened for them) just a few months before Tom passed away. For those of you who are feeling a little nostalgic, a link to the remastered video from YouTube is included below.

Why are we talking about waiting? Great question, I am glad you asked. Today’s question is related to inflation and how long we are going to have to wait to see it come down to levels we would associate with historical norms. Let’s dig in.

To understand what the future holds, we need to put where we are now into context. For most of the last two decades, inflation has been less than 2% per year. As this became our new normal, the much higher inflation that we experienced in the 70’s and 80’s became a distant memory due to a psychological phenomenon known as recency bias. Inflation, even at low levels, reduces purchasing power. This robs us of our ability to buy the same amount of groceries, prescriptions, and gasoline that we were purchasing just the year before.

Over the last 75 years, the Consumer Price Index, CPI, which is the proxy we will use for inflation, has risen at approximately 3.4% per year. This means that it now takes more than $1,200 today to buy what $100 would have purchased in 1947, just after the end of World War II.

As most people could have a retirement life expectancy of 20 to 30 years or more, this ongoing inflationary assault can be substantial. It happens slowly and consistently, sort of like water wearing away a rock. It is important to remember that theft in slow motion is still theft. And more importantly, it is no longer going in slow motion.

As you can see in the chart below from the Federal Reserve Bank of St. Louis, FRED, we have experienced the same amount of inflation in just the last 21 months that we experienced in the prior seven years combined. 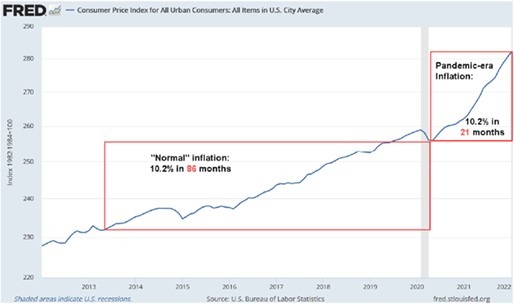 You will also notice that our long-term average inflation rate is anything but average. It is simply the combination of the highs, such as those we experienced after World War II and the late 1970’s, and the lows, such as the 10-year period after the Great Financial Crisis of ‘07-‘08. The red line through the middle is the 75-year average of 3.4% per year. The level of inflation we are currently experiencing has only been seen a couple of times in the post-World War II era. While some inflation is normal, today’s is abnormally high. 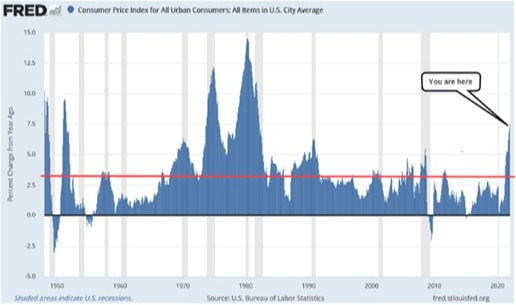 Which brings us back to the question, how long are we going to have to wait to see inflation come back down towards levels that would feel more comfortable?

It is important to remember that some components of inflation are indeed transitory. This is THE WORD the Federal Reserve Bank and the Treasury Department retired in November, after using it insistently for more than eight months. As the impact of federally granted stimulus fades (note the two spikes in the graph below), and supply chains begin to catch up to demand, the impact of inflation on manufactured goods should start to moderate. 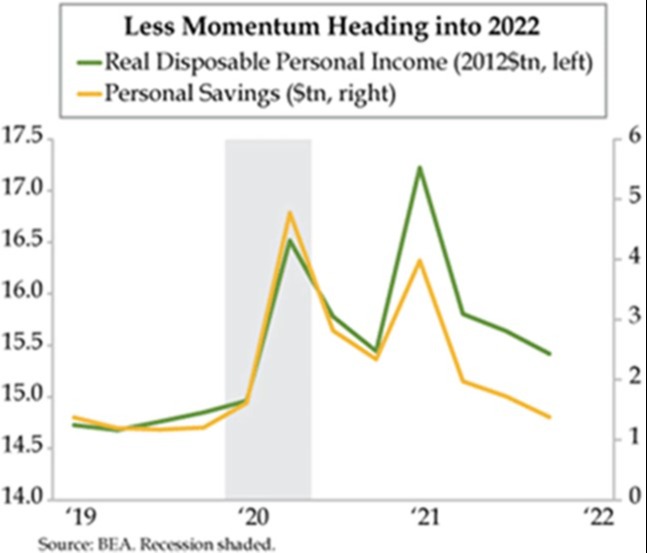 However, other parts of the inflation equation are proving to be stickier, and therefore harder to solve. This would include wage inflation, oil and gas prices, which are being exacerbated by the current geopolitical unrest between Russia and Ukraine, as well as housing prices and rent increases.

It is also very important to remember that even though the Fed is telling us that they are going to stop purchasing bonds in March (can anyone tell me why the Fed is still buying bonds with inflation running at more than 7%) and will likely embark on a campaign to raise interest rates to fight inflation, the effect won’t be felt for a number of months. Monetary policy works with a lag, which generally takes 6 to 9 months to work through the economy. This means that the actions that the Fed is going to initiate in the coming months will likely not work through the overall economy until later this year.

The Federal Reserve Bank and the Federal Government have no direct way to lower prices at the grocery store, gas pump, or pharmacy. As they tighten monetary policy, we will have to be patient and wait, and hope, that prices start to moderate over time. Indeed, the waiting is the hardest part.

The team at Impel Wealth Management will continue to provide you with insights and information so that you can understand how these factors impact your financial and cashflow situation. We stand ready to help you navigate these unusual and uncertain times. Please let us know if you have questions and how we can help you continue “Moving Life Forward”.