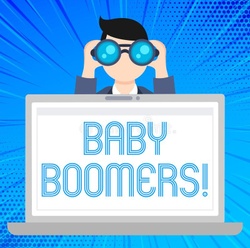 Where Have ALL the Baby Boomers Gone?

We know that the Baby Boomers generation has had an enormous impact on our economy since they first started showing up on the US landscape shortly after World War II. Traditionally defined as those born between 1946 and 1964, they have shaped trends and influenced stocks and asset classes for decades.

Once again, they are exerting enormous pressure on a portion of the US economy, this time the labor force. As you can see in the chart below from the Federal Reserve Bank of St. Louis, the percentage of retirees as a percentage of the population started moving up around 2010. This makes sense as this coincides with the year the first baby boomers turned age 65.

In what is being touted as “The Great Resignation”, you can see that in 2020, the percentage of retirees moved up dramatically from the previous decade’s trendline. There are a number of reasons why people might have retired at that time, the most obvious being the outbreak of the COVID-19 pandemic which forced the shutdown of many jobs. Some Baby Boomers probably decided to stay retired due to health concerns.

However, in addition to government assistance from enhanced unemployment benefits and multiple rounds of stimulus checks, many retirees have seen the value of their assets grow considerably over the last decade. This would include the value of their residences and real estate, as well as the value of their 401(k)s, IRAs, and other invested assets. These may have provided enough of a financial cushion to allow some Baby Boomers to just hang it up and ride off into the sunset. 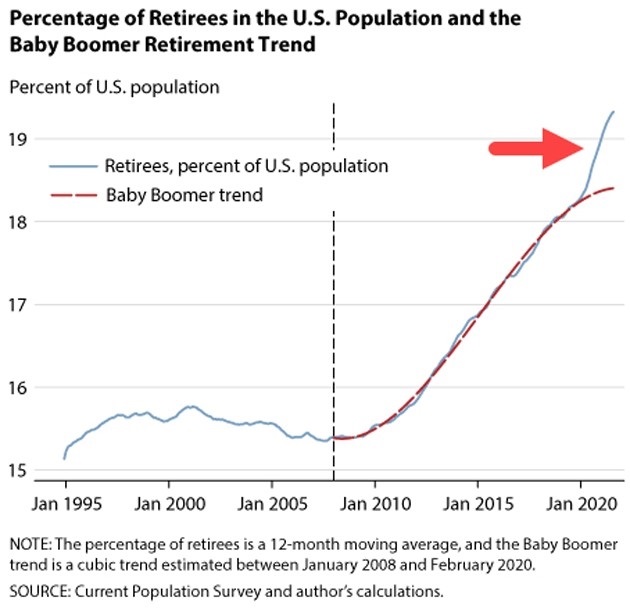 We also know that the social and psychological impact of the pandemic caused many people to reevaluate what is most important to them in life. Some people may have decided enough was better than more, and instead of focusing on work and accumulation, they decided to focus on life, family, and bucket list goals.

While moving from just over 18% to 19% of the US population may seem like a small move on the graph above, it represents nearly 3,000,000 additional retirees over and above what would have been estimated from previous trends. This is a substantial reduction in the US workforce, and it is likely adding to the struggles and pressures employers are feeling to hire workers for unfilled jobs.

We see this illustrated further in the chart below from the Bureau of Labor Statistics and Bloomberg, which shows the labor force participation rate among men and women ages 55 and older. For years, they made up a relatively steady part of our labor force. It is clear to see that when the pandemic started in 2020, both lines dropped off dramatically. Surprisingly, even as the economy recovered and jobs reopened, a large number of these people that left the workforce did not return. 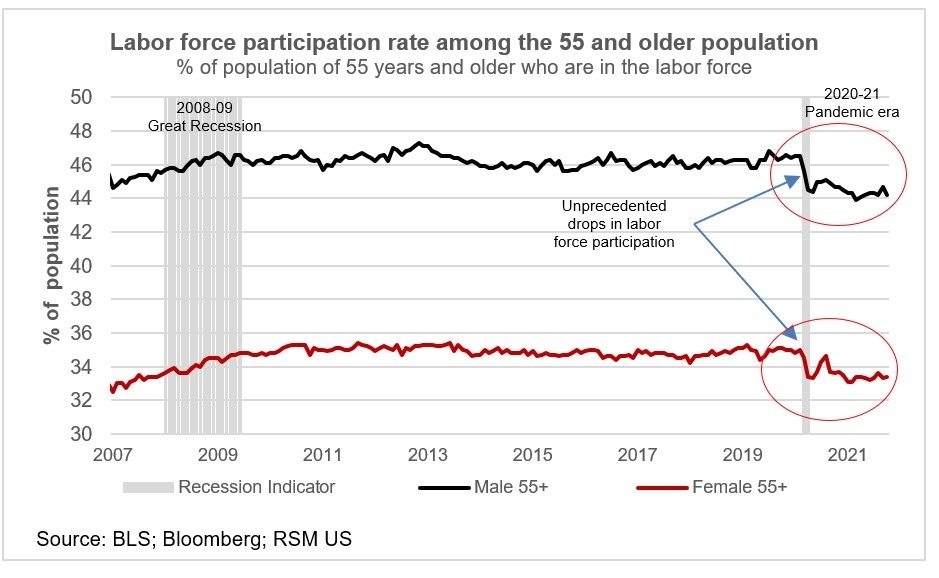 Whatever the reasons are for not returning, the impact is clear. There are currently a whole lot more jobs available in the United States than there are workers to fill them. Unless there is significant incentive for people to return to work, this will be an ongoing problem for employers.

It could lead to poor service in restaurants and hotels where employers are struggling to find qualified workers. It could lead to not enough dock workers or truckers to unclog the supply chain. It has certainly led to much higher wages, which so far employers have passed on to consumers in the form of higher prices. All of this means higher and stickier inflation than was originally predicted by the Fed.

There are significant forces at work reshaping the economy, the workforce, and pricing mechanisms for goods and services that we consume every day. These trends are important to understand both from a cashflow and an investment standpoint. We wanted to make sure you were aware of both the impact on you, and that the team at Impel Wealth Management is paying significant attention how to help you, our trusted friends and clients, manage through the “Next Normal”. It is important for us to give you guidance and confidence as we continue “Moving Life Forward”.

The views stated are not necessarily the opinion of Cetera Advisors LLC and should not be construed directly or indirectly as an offer to buy or sell any securities mentioned herein. Due to volatility within the markets mentioned, opinions are subject to change without notice. Information is based on sources believed to be reliable; however, their accuracy or completeness cannot be guaranteed. Past performance does not guarantee future results. Investors cannot invest directly in indexes. The performance of any index is not indicative of the performance of any investment and does not take into account the effects of inflation and the fees and expenses associated with investing.