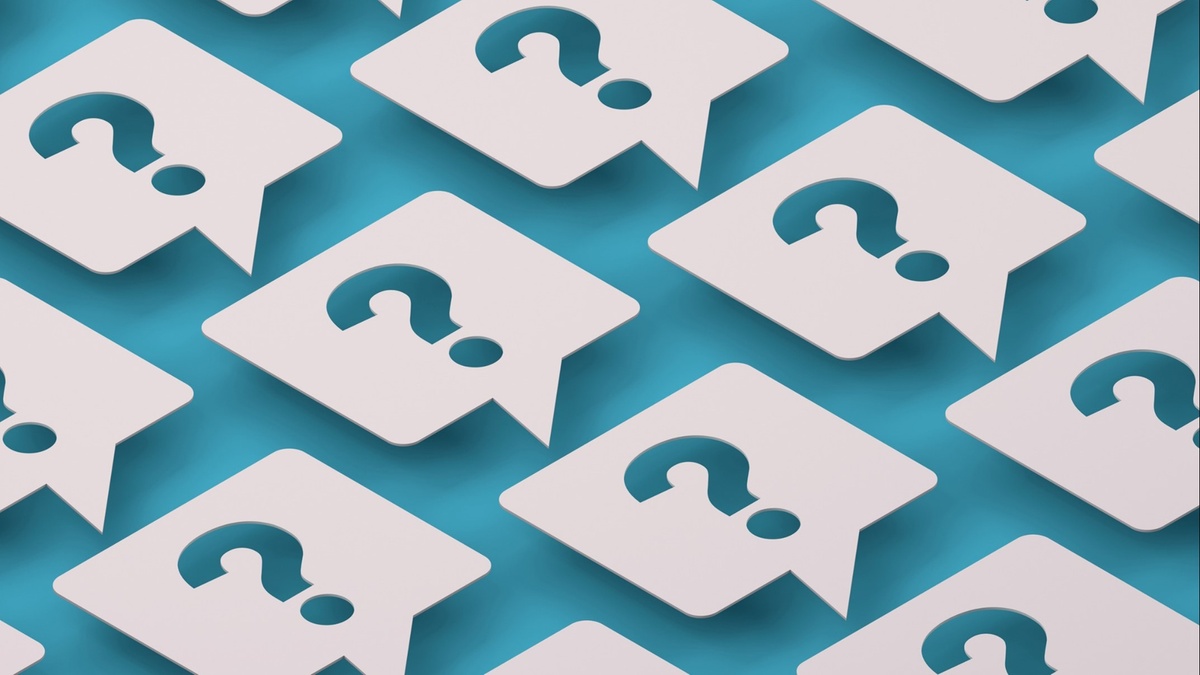 When my sons Shane and Zach were young and going to Vacation Bible School, they were often introduced to real life situations and moral dilemmas. This taught them that the world was not always black-and-white, and that they had to think through how they would respond to what happens. Oftentimes, they were asked to use the moral compass of WWJD? This acronym stood for What Would Jesus Do? It gave them a standard by which to think through what life presented.

In calendar year 2022, we are going to look at what could potentially happen in our economic and political world through a similar, but non-divine acronym, WWJ(3)D? The number 3 stands for the three J’s that will have significant say and sway over what might happen this year.

1) Jerome “Jay” Powell: The first J in our list is not only a real Jay, but he is also the Chairman of the Federal Reserve Bank. There is arguably more attention paid to every word written or said by Jay Powell than just about anybody in the world. The statement that the Fed puts out after each meeting is carefully scrutinized by the markets, economists, and journalists across the globe. His words have the power to move stock and bond markets up or down.

We all know when we go to the gas station or grocery store, inflation, which the Fed told us was temporary or transitory for most of last year, has proven to be much more persistent and stubborn than was expected. As you can see in the chart below, the most recent CPI report showed the highest level of inflation that we have seen in nearly forty years at 7%. 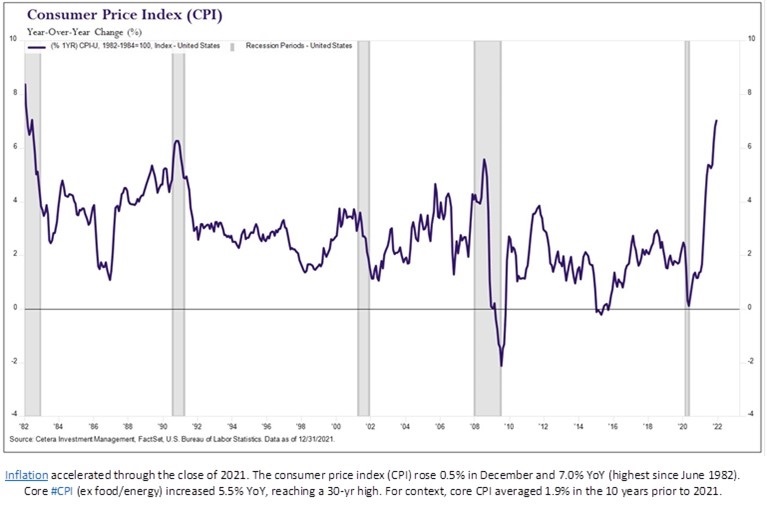 This has caused the Federal Reserve to shift its policy dramatically in the last few months. As recently as last summer, the Fed was telling us that they were not planning to raise interest rates in calendar year 2022. They are now projecting at least three interest rate increases. We will find out more when they meet at the end of January. There are people from various sides of the economic and political world taking both the over and the under on whether the Fed will follow through with these plans.

2) President Joe Biden: Our second J is Joe Biden. With the Fed providing cover that inflation was temporary earlier in 2021, President Biden, along with a partisan and divided Congress, were able to get through a $1.9 trillion stimulus bill, the American Recovery Act in the spring of last year. Additionally, they were able to negotiate a substantially scaled back infrastructure plan of $1.2 trillion which finally passed both houses and was signed into law in November.

However, as inflation moved higher, there became a greater reluctance to pass yet more stimulus. Various Congress people from both sides seemed hesitant to pour more fuel on the inflation fire. This has seemingly put a stop, at least for now, on any additional stimulus and spending packages that were a cornerstone of President Biden’s agenda.

3) Senator Joe Manchin: This leads us to our third J, Joe Manchin. The relatively moderate, but Democratic Senator from West Virginia. He comes from a state that overwhelmingly voted Republican in the last election. His state has huge ties to the oil and gas industry, and he also seems to have a historical respect for the traditions of the Senate, including the filibuster.

He is not alone. Arizona Senator Kristen Sinema has also been similarly opposed to raising taxes and changing traditional Senate rules in order to pass the legislative agenda of one party. However, Senator Sinema’s name does not start with the letter J, so she had to be an adjunct example in this article. We all know the politicians on both sides can be hypocritical and tend to have short memories about things they said just a few years ago, when people on the other side of the aisle were in power.

4) JOBS: our special bonus J is what is going on with the jobs market. For most of the last six months the number of jobs created has fallen short of expectations. There are significant differences between the payroll report and the household report as you can see in the chart below.

We also know that millions of Americans have simply left the job market, leaving employers scrambling to fill positions. Nearly three million of these people were age 55 and over that seem to have retired early. However, a large number of 25–45-year-olds have also left the job market, and nobody really knows why or where they went. There are many hypotheses being floated at the present time.

With more jobs open than there are workers to fill them, they are having to raise wages significantly. As a matter of fact, wages are rising for people in the lowest 25% of wage earners significantly faster than they are for those in the top 25%. This is also causing the same employers to try to raise prices to offset some of the higher cost of their employee’s compensation.

We thought this would be an interesting way to show a number of the J’s that will influence the economy and the markets over the next year, which will include what promises to be a contentious midterm election season. We know that historically, midterm election years tend to be relatively flat and volatile in the first nine months or so leading up to the election. They tend to finish the year on a stronger note once the electoral uncertainty passes. You can see this in the chart below provided by our friends at the American Funds/Capital Group. 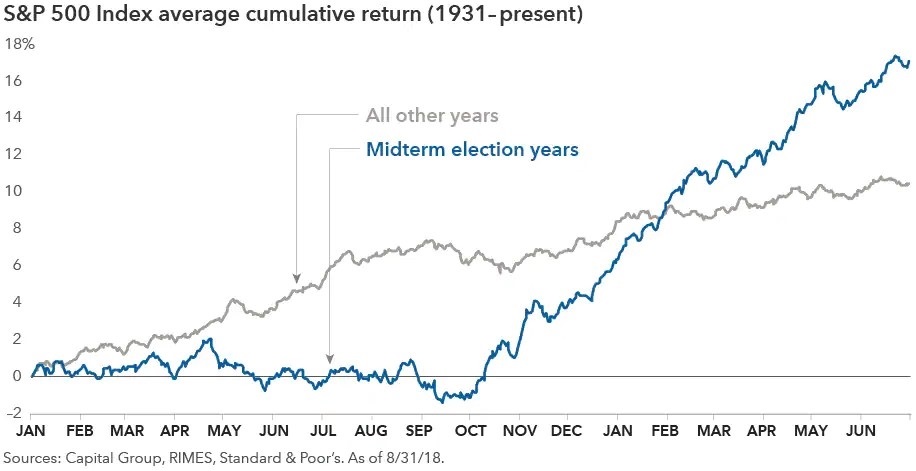 The team at Impel Wealth Management will continue to watch and monitor these trends for the benefit of our friends and clients. We will do our best to keep you informed, in an educational and non-partisan way. We hope this helps us manage and navigate the road ahead. It is part of our mission as we continue “Moving Life Forward” together.

The views stated are not necessarily the opinion of Cetera Advisors LLC and should not be construed directly or indirectly as an offer to buy or sell any securities mentioned herein.  Due to volatility within the markets mentioned, opinions are subject to change without notice. Information is based on sources believed to be reliable; however, their accuracy or completeness cannot be guaranteed.  Past performance does not guarantee future results. Investors cannot invest directly in indexes. The performance of any index is not indicative of the performance of any investment and does not take into account the effects of inflation and the fees and expenses associated with investing.