The Investment Committee of Horizon Advisor Network met on the afternoon of Tuesday, July 13th.  We had representatives from Cuyahoga Falls, Cincinnati, Atlanta, and Baton Rouge present for today's meeting.  We began our meeting with a review of the investment performance of the model portfolios managed by the committee.  We were happy to report that the portfolios are performing in line or above their historical benchmarks, on a risk-adjusted basis, over the last one, three, and five years.

There were no major changes made to the model portfolios over the last month, and adjustments made previously seem to have the models aligned with our economic and investment outlook for the near term.

We are closely watching several issues impacting financial markets.  There are currently a number of risks present in the economic and the political backdrop. The first of these is a new wave of COVID-19 cases, mostly due to the Delta variant. This is playing out across the country, especially among unvaccinated individuals.  There is some concern that this could cause new restrictions that could slow economic growth and the reopening that has been underway since the COVID-19 vaccines were initially introduced. We will continue to monitor this closely.

We also have seen drama play out on Capitol Hill with a proposed bipartisan agreement of approximately a $1T infrastructure spending plan.  There is some question as to whether this will move forward based on additional spending plans from the House Democrats. It will be interesting to see whether Representatives on both sides of the aisle can come to an agreement on the traditional infrastructure package and what this may mean for our tax system.

We know that our current economic recovery has been driven by a combination of both fiscal stimulus from Capitol Hill and monetary stimulus from the Federal Reserve Bank. We can see this reflected in both GDP growth and in recent reports on the manufacturing side of the economy 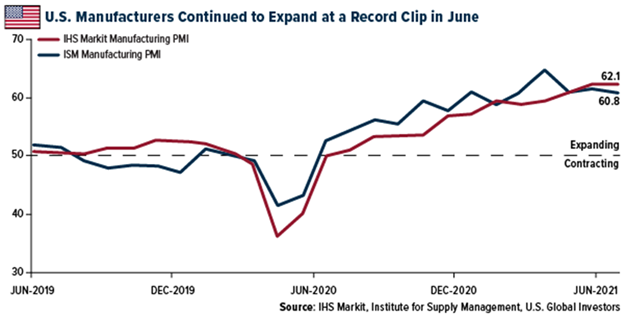 While we are uncertain if there will be additional fiscal stimulus in the future, the Fed has pledged to keep its foot on the peddle for the foreseeable future. This comes even though inflation is running well above expectations. The July inflation report showed year over year inflation at 5.4%, the most in 13 years. The same report showed that core inflation rose at 4.5%, the hottest since 1991, thirty years ago.
This may put pressure on the Fed to slow its quantitative easing measures. They are currently purchasing $120B per month of bonds: $80B per month of Treasury bonds and $40B per month of mortgage bonds. There is some concern that if the Fed pulls back, there would be less demand in the bond market. This could cause bond prices to fall and interest rates to rise. This is something the Committee will continue to monitor closely.
On a positive note, earnings for the second quarter of the year are currently being reported by corporate America. They are expected to rise 50%-60% or more year-over-year, against subdued numbers reported a year ago in the midst of the initial coronavirus lockdowns. Substantial growth in earnings would help reduce the price/earnings ratio of the market, bringing stock valuations down to more reasonable levels. This is especially true against a backdrop of continuing low interest rates. 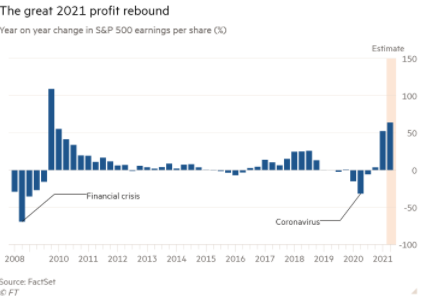 The Committee appreciates your continued trust and support. It is something we do not take for granted. We will work diligently to continue to manage and grow your hard-earned assets while keeping appropriate risk management in mind. The committee is committed to staying on top of the current investment and economic climate. We stand ready to make adjustments as news or events warrant.
Should you have any questions regarding these notes, please do not hesitate to reach out to your advisor. Thanks, and have a great day.
The views stated are not necessarily the opinion of Cetera Advisors LLC and should not be construed directly or indirectly as an offer to buy or sell any securities mentioned herein. Due to volatility within the markets mentioned, opinions are subject to change without notice. Information is based on sources believed to be reliable; however, their accuracy or completeness cannot be guaranteed. Past performance does not guarantee future results.