The Horizon Advisor Network Investment Committee met on the afternoon of June 8th, 2021.  We are pleased with the current allocation and performance of our model portfolios, which continue to be in line or above their risk adjusted, asset allocation benchmarks over the most recent one-, three- and five-year periods of time.  The previous adjustments made by the committee to our various models have us positioned well for the current economic environment.

After a relatively short and shallow pull back of less than 5% in the early part of May, the S&P 500 has resumed its upward march and has hit new all-time highs this week.  Over the last six months the S&P 500 has traded down to its 50-day moving average four separate times.  Each time it has bounced off this support level and continued to move higher, as economic data and continued fiscal support from the U.S. government has supported asset prices. 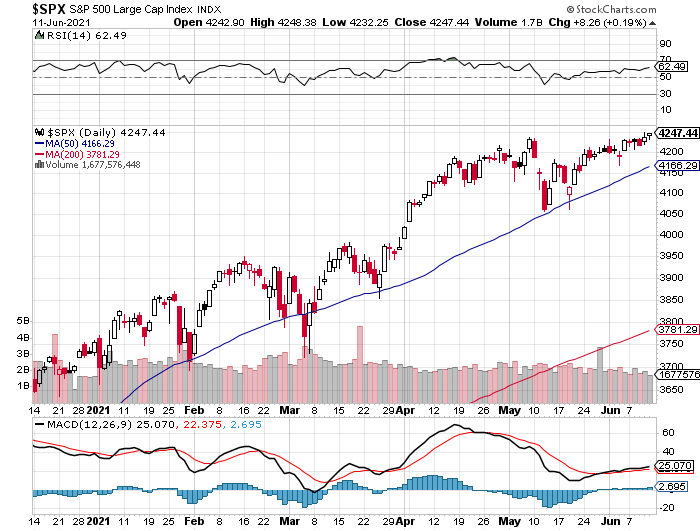 Recent economic reports continue to show the economy growing strongly and rebounding from last year's COVID-19 shut-downs, quarantines, and social distancing requirements.  The most recent ISM services report hit a new all-time record high.  This is very important, as the service sector represents more than 85% of economic activity.  There is, however, some question and concerns among the various market strategists and economists followed by the committee that we may be nearing peak growth in the coming months.  This does not mean that the economy will necessarily go backwards, it just means that future growth may not be as strong as we have recently experienced. This is primarily due to various forms of government stimulus fading from current impact. This has been reflected by the U.S. Citi Economic Surprise Index coming back down from its post pandemic highs. 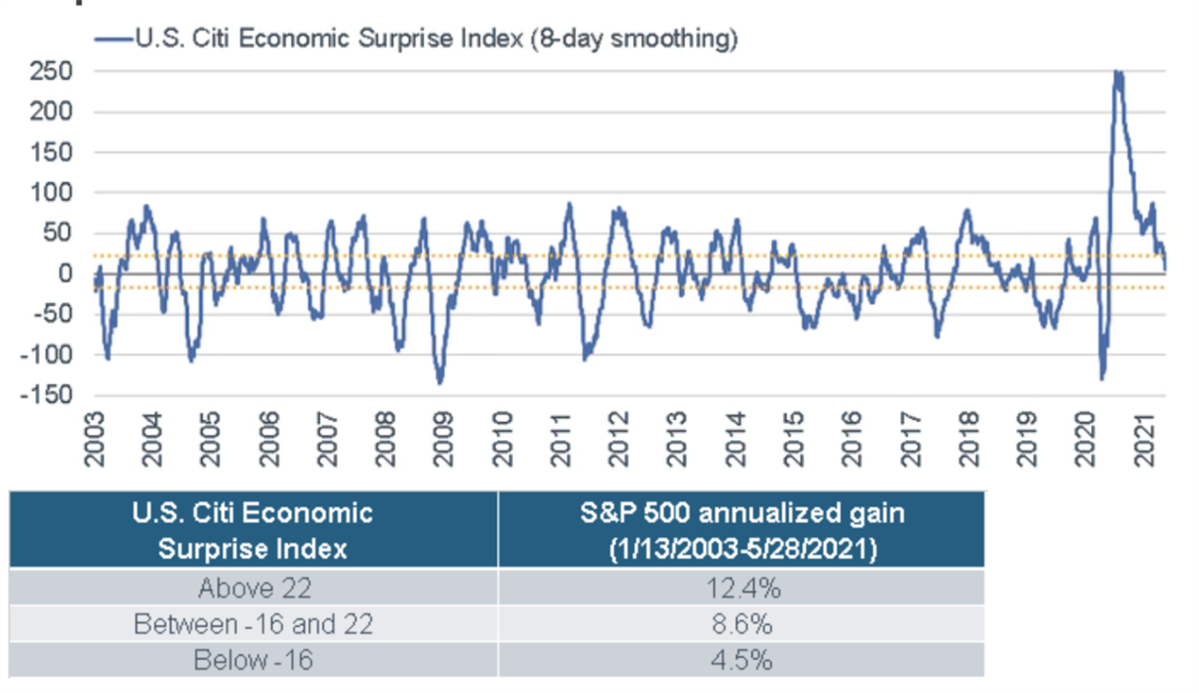 Source: Charles Schwab, The Conference Board, ©Copyright 2021 Ned Davis Research, Inc. Further distribution prohibited without prior permission. All Rights Reserved. See NDR Disclaimer at www.ndr.com/copyright.html. For data vendor disclaimers refer to www.ndr.com/vendorinfo/, as of 2Q2021. Yellow dotted lines represent Citi Economic Surprise Index readings of above 22 and below -16. Indexes are unmanaged, do not incur management fees, costs and expenses and cannot be invested in directly Past performance is no guarantee of future results.

Unfortunately, employers are having a hard time encouraging people back to work. Many find themselves competing against the federal government’s enhanced unemployment benefits, which has encouraged people to not seek work at the present time. These benefits will be ending at the end of June in a number of states across the country, and the rest are set to expire in late September. The most recent JOLTS report from the U.S. Bureau of Labor Statistics showed more than nine million jobs open. This is nearly one million more than we had the previous month, and a new all-time high for the second month in a row. Unfortunately, job growth was disappointing for the second month in a row, with less than 600,000 new jobs created last month and less than 300,000 jobs created the month before. Both months had expectations for one million or more jobs to be created.

The Federal Reserve Bank will be meeting again this week. They continue to support the narrative that inflation risks are temporary or transitory. They say that these numbers will come back down as supply chain issues are addressed, and once base effects fade into the past. We will continue to monitor this. The Federal Reserve Bank is continuing to support the economy, the bond market, and the banking system by buying $120B per month of Treasury and mortgage bonds. This comes in a strongly growing economy. As of June 9th, the Atlanta Fed’s GDPNow model estimates real GDP growth in the second quarter of 2021 of 9.3 percent. For comparison purposes the Fed was buying a maximum of $85B per month of Treasury and mortgage bonds after the Great Financial Crisis. This has helped keep interest rates on 10-year Treasuries at relatively low levels, even as year over year inflation hits the highest level that we have seen in many years. Last week’s CPI report showed core inflation running at the hottest level in nearly thirty years. 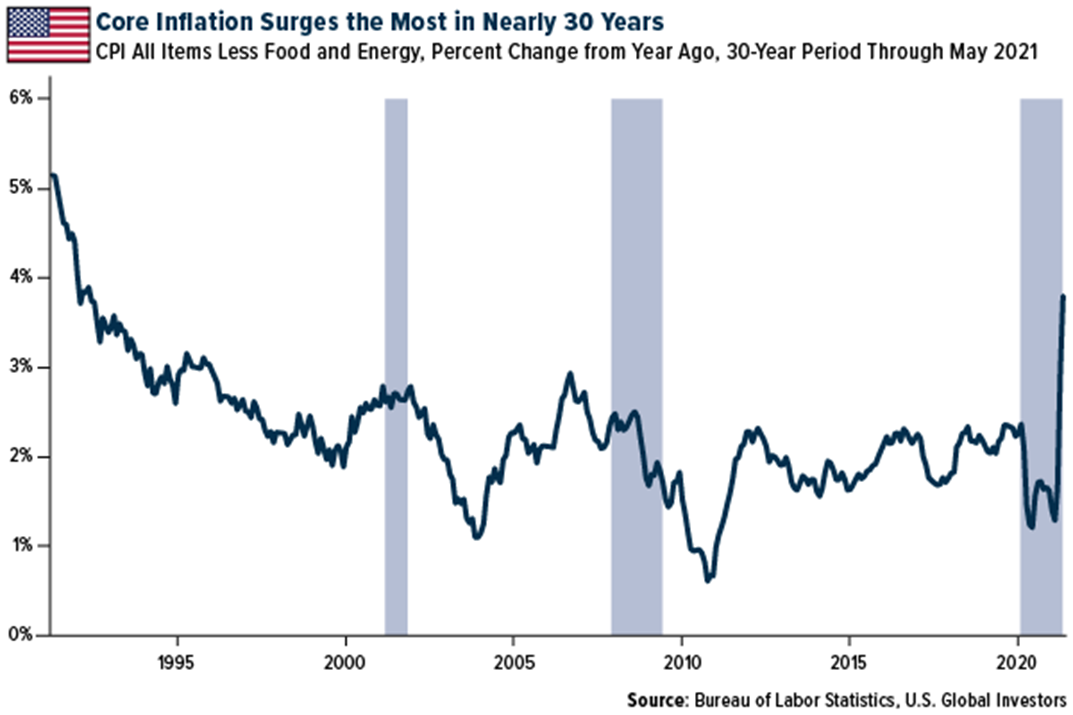 Our committee believes that we have allocated our model portfolios in a way that allows us to manage these various economic and political uncertainties. We will continue to monitor these trends and stand ready to make adjustments if and when necessary. We thank you, our trusted friends and clients. We will do everything we can to continue to earn that trust. Should you have any questions regarding these notes, please do not hesitate to reach out to your advisor. Thanks, and have a great day.

The views stated in this letter are not necessarily the opinion of Cetera Advisors LLC and should not be construed directly as an offer to buy or sell any securities mentioned herein.  Due to volatility within the markets mentioned, opinions are subject to change without notice.  Information is based on sources believed to be reliable; however, their accuracy or completeness cannot be guaranteed.  Past performance does not guarantee future results.