The Horizon Advisor Network Investylitics Committee met on the afternoon of June 6th. All members were present and had the opportunity to share their insights and investment research with the team. We were happy to see how well our portfolios had performed given the significant volatility in both the stock and bond markets this year.

As the media trumpeted the onset of a bear market, all major stock market indexes in the United States were down more than 20% from their peaks by late May of this year. We expect volatility to remain elevated due to rising inflation pressures, higher oil and gas prices, geopolitical unrest in Europe, as well as ongoing supply chain issues, which have recently been exacerbated by the additional Covid shutdowns in Shanghai, China. We remind you that the media will ring the warning bells at each of these events because it sells newspapers and brings in viewers. However, we want to encourage you to stay the course with your long-term plans. Panic and emotional responses over short term events have historically proven to not be an effective strategy to build and maintain wealth.

We are experiencing a new phenomenon this year as the bond market is down nearly 10%. Over the last 30 years, the markets have become somewhat accustomed to the Federal Reserve Bank cutting interest rates and providing liquidity to the markets during times of economic volatility, dislocation and downturn. We have seen this play out during scenarios such as the dot.com bubble, 9/11, the subprime mortgage crisis and the failure of AIG/Lehman Brothers and most recently during the initial Covid shutdowns in March 2020.

However, with inflation persistent and rising, the Fed is planning to aggressively raise interest rates. At the same time, they are planning to reduce their balance sheet which could reduce bond prices and increase bond interest rates. We will watch this process closely, as the Fed tried to do something similar in 2018, only to reverse course as market volatility increased. The Fed has stated their intention to follow through this time because of the damage inflation is doing to the economy.

They will also use “Fed Speak” to influence consumer behavior. It is important to remember that the Fed cannot influence the supply side of the economy. They cannot lower oil and gas prices or create more microchips. Therefore, they are focused on slowing the demand side of the economy. They believe their words and actions will slow the housing market. As you can see in the chart below, the combination of rising home prices and rising mortgage rates has significantly increased mortgage payments and housing affordability over the last year. 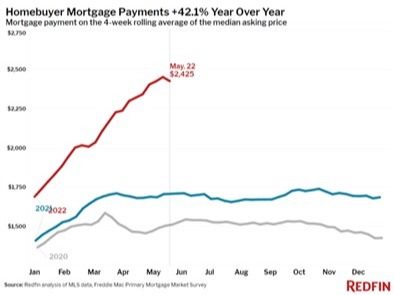 They have their work cut out for them as oil and gas prices continue to rise. This is while economic activity has been restrained in China due to the recent Covid lockdowns. Once these lockdowns are lifted, there will be additional pressures and demand for oil and gas which could further increase prices. We will be watching closely.

The Fed is also concerned about rising wages. As you can see below, there are nearly two jobs available for every person looking for work. This is continuing to put workers, rather than employers, in the driver seat demanding higher compensation and benefits. Both the current Fed Chair, Jay Powell, and former Fed Chair, Ben Bernanke, have stated that they would like to lower the number of job openings to bring this ratio closer to one to one. In my 34 years of doing this, I have never heard the Fed state that they would like to reduce housing prices, stock prices and reduce the number of jobs in the economy. We are truly living in unique and unprecedented times. 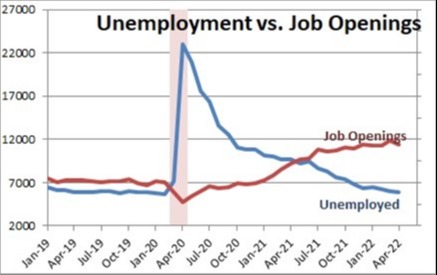 It is important to remember that your financial plan should be your NorthStar. It should guide your actions, or lack thereof, during times of volatility such as this. Staying focused on your long-term financial goals is similar to looking at the horizon while navigating the stormy waters and waves around you. We want to remind you that if this were easy, most people would be rich. Most people are NOT. Therefore, we want to help you pursue alternate thoughts and actions to what the masses typically do.

Please remember that your advisor is here to help you reach your goals and answer any questions you have about your unique situation. It is our mission as we continue to help you and your family. We look forward to talking with you soon. Thank you again for your continued trust and confidence in our team.