• After dropping significantly in September and the first half of October, to new lows for the year, the stock market has rebounded significantly over the last six      weeks.
• A number of economic reports and indicators continue to show that the economy is slowing and that the probability of recession in the first half of 2023 is            rising.
• While US and global stock and bond markets have suffered double-digit losses this year, it is important to remember that historically, periods of negative            returns have often been followed by higher returns going forward.
• Based on history, several seasonality factors could give us a reason for optimism.
• As always, it is important to talk with your advisor before making significant or emotionally based financial decisions. We have walked clients through                  previous  bouts of volatility and want to help you make wise decisions.

The Horizon Advisor Network Investylitics committee met on the afternoon of Tuesday, November 29th. This will be our last meeting of the year. We will move back towards our regular meeting schedule, the Monday after the monthly unemployment report is released. We were happy to have the opportunity to share each team member’s research and insights from the last month, as a lot is going on from an economic and geopolitical standpoint.

The market went through its third significant downturn of the year from mid-August to mid-October, with the S&P 500 closing just below 3500, down 26% for the year. Then, just as quickly, the market rebounded significantly over the last six weeks. It is now approaching both trendline resistance levels, and its 200-day moving average. As we have stated multiple times this year, we expect volatility to persist until inflation pressures start to subside. This will then allow the Federal Reserve Bank to pause or pivot its interest rate hike campaign.

There is still a lot of talk and speculation about if or when the US economy will be in recession. There is a notable slowdown in hiring and manufacturing activity. Several sentiment surveys have also turned decidedly negative, which would point toward a future recession. The index of Leading Economic Indicators has now fallen for an eighth consecutive month. This has never happened without a recession following in the next few months.

Additionally, the yield curve, which shows the relationship between short-term and long-term interest rates is now inverted. This means that the Federal Reserve Bank has driven short-term rates above longer-term rates. This condition has preceded the last seven recessions, as you can see in the chart below. 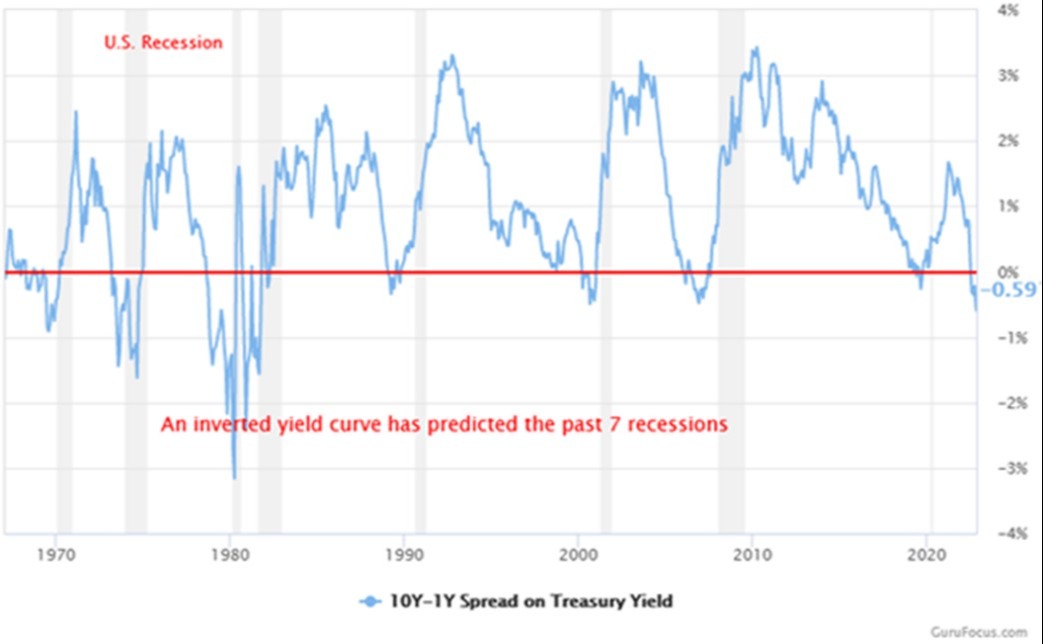 We have seen double-digit downturns in most global stock and bond market indices this year. Unlike most of the last 30 years, the Fed has been raising interest rates as the economy has slowed and the stock market has fallen. In the past, bouts of economic downturns and volatility have resulted in the Fed aggressively cutting interest rates. This helped spur economic activity. It has also led to bond prices rising when stocks were falling.

We would like to remind you, that stock market downturns have historically been followed by future periods of rebound and growth. We also know that as interest rates paid on bonds rise, there is a strong correlation to future returns. This means that even though returns have not looked very pretty when looking into the rearview mirror, they will likely become much more attractive when looking through the windshield of the future.

There are also a couple of seasonality factors to consider presently. The first is that the fourth quarter tends to be the strongest of the year for market returns. This may be why it is known as a Santa Claus rally.  This is certainly not a guarantee, but we can look to it for some historical precedents.

We also know that the year following the midterm elections has produced strong rates of return. As you can see from the chart below, since 1950, the 12 months following midterm elections have never posted a negative return. Again, past performance does not guarantee future returns. But as Mark Twain is purported to have said, “history doesn’t repeat itself, but it often rhymes”. 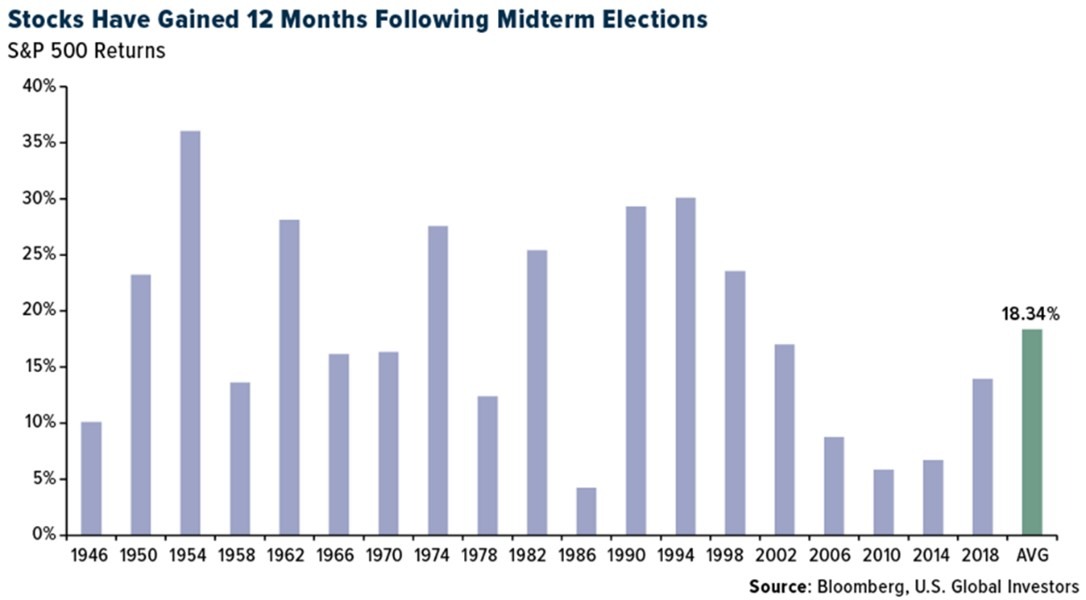 Lastly, we would like to remind you that we are here for you. The advisors of the investment committee have decades of experience in guiding clients through times of uncertainty and volatility. We encourage you to reach out to us if you have questions or are tempted to make an emotional decision. We know from experience that decisions made in this way often result in future regret. Please let us know how we can help. Thanks, and we hope you and your family have a blessed holiday season.